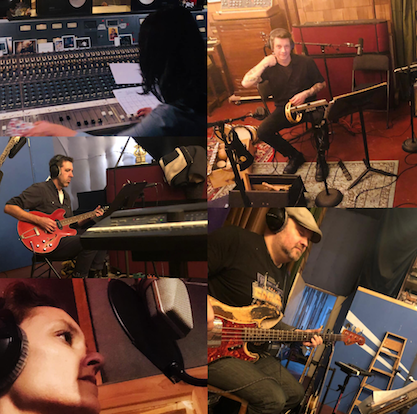 I rounded up a great crew of musicians to record The Department of the West: songwriter/guitarist Danny Allen whose playing I’d admired since I caught one of his sets at an Oakland show then saw him accompanying several other esteemed Bay Area songwriters (Mick Schaffer, Val Esway, Joe Rut). Likewise, Kevin White has long been a go-to on bass for many when he’s not playing with Chuck Prophet in The Mission Express. And I’ve called on drummer Mike Stevens (The Uptones, Sun Kil Moon) for more than a decade since Ben Bernstein and Kwame Copeland recommended him for a show shortly after I released my first full-length record. Their work was rounded out by Kwame who added backing vocals and harmonica; Maurice Tani and Heather Davison also added backing vocals, and the formidable engineer/musician/singer Maryam Qudus, who stepped away from the board long enough to sing and add keys to a couple songs. Yes, a GREAT bunch!

Between now and it’s official release day, I’ve been sharing the backstory for to the songs The Department of the West (December 6, 2019), and a preview of the recording. Pre-order the record    and/or buy a ticket to the San Francisco record release show on Thursday, Dec 5 at Amado’s  and I’ll send you the featured song of the week!
.